A while back, James brought the free, GNU Project software, engraving program LilyPond to my attention. At first, I quickly grew impatient with learning this coding-style, text-input format of this program, and I abandoned it. But, recently, I’ve come back to it, with renewed interest in making my scores and parts much more professional-looking and appealing for those who purchase and read from them.

I laugh, because all it took for me to regain hope in my learning how to use LilyPond’s interface, was taking an hour or two to carefully read merely the first few chapters of the introductory manual. That’s all I needed to get a solid handle on how to think in the text-based terms of this new coding world! Lesson learned: Don’t give up on something until you at least have read the first few pages of the tutorial!

Well, in my spare time here and there throughout this week, I have  completed the uploading and tweaking and perfecting of the score to Image 2 from my Courage Triptych: “Broken Innocence”. [Note: Completing my score in MuseScore, another free graphic notation system, allows me to save the MuseScore file in a format that LilyPond can read; thus I can simply import, rather starting from scratch… Although, I do anticipate getting to know LilyPond so well that, one day, I may just use the text-based system entirely from the beginning… Wouldn’t that be wild?]

Check out the first page below… This engraving really puts the professional edge on it! And, once you get the hang of how to read the text system, everything else is done automatically, with freedom for you to adjust elements as necessary. It’s a really great system so far — I look forward to eventually converting ALL my available scores and parts to this LilyPond engraving system. 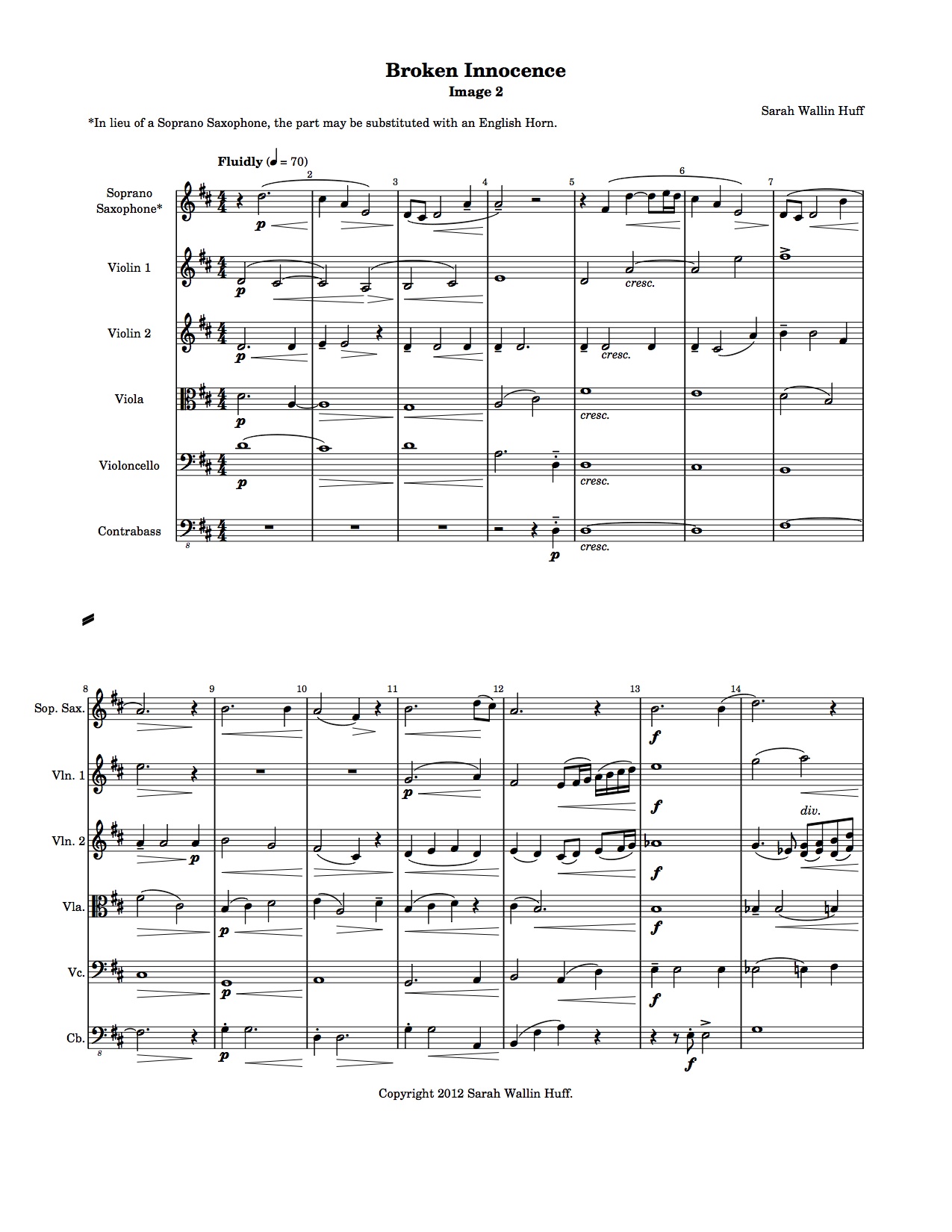 UPDATE (10/1/2016): I am always experimenting with new technology to improve my demo-rendering experience. I am still fully hooked on the notation software Notion for both iPad and desktop and fully enjoy using it for the ease of my process of composing as well as the ease and beauty of rendering the digital demo recordings — thanks to their beautiful playback sampled from recordings of the London Philharmonic! But both MuseScore and GarageBand have come out with incredible updates!! So, as of late, I use GarageBand as my DAW (it does import tempos now! And the “live drummer” option is phenomenal to work with!) and I use my Notion playback as my base then play with the sounds in the MuseScore SSO collection to overlay and enhance certain families, like the strings. Finally, I’ve also been using the free Audacity to create really amazing sounding finishing touches… It all helps to give a much fuller and more realistic sound. ^_^

In the midst of working on my latest composition “Of Roses and Lilies” with my current favored music notation program, MuseScore (which is FREE, btw!!), the SoundFont I had been nonchalantly working with — without any further thought about it until now — decided to go a little wonky on me….. 😕

I’m usually not phased one bit by what sounds do or don’t come out of my computer’s speakers while I’m writing… When I ultimately started composing (in the truest sense of the term, I guess) at the tender age of 13, I didn’t have a computer! So, everything I did was by hand, with only a miniature keyboard and my own mind to guide my sense of the resulting sound. So, to this day, when I compose, I’m always more concerned with the artistry and construction of the writing itself, knowing that the final result with live instruments will always come out the way I want it (erm, that is, after the whole rehearsal-thing… lol…)

But, the way the current SoundFont (I was using TimGM6mb.sf2 at the time, decent but definitely MIDI-esque; like I said, I didn’t care…until…) was behaving as my score got bigger and more complex finally caused it to revert to some weirdness with the violins at one point in the middle of the score. I couldn’t figure out what was going on to make it do that — and, quite frankly, I didn’t really want to spend all my time figuring it out for sounds that I didn’t pay much attention to anyway. So, I decided, maybe it was time to move on and explore various other free SoundFont options that were available online….

I started googling around for free SoundFont options, and eventually I stumbled upon this HIGHLY recommended creative commons project, Sonatina Symphonic Orchestra:

Sonatina Symphonic Orchestra is a free orchestral sample library. While not as advanced or ambitious in scope as commercial offerings, SSO contains all the basic building blocks for creating real virtual orchestrations. It’s primarily aimed at beginners, but also more experienced composers looking for something lightweight and/or portable might find it useful.

I listened to the mp3 sample of what this library could do, and I was greatly impressed! This was for me, man!

So I downloaded it… and discovered that the format of the SSO library — .sfz — is NOT compatible with the format that MuseScore can read — .sf2 or .sf — DOH!

Ok… Round 2… I googled about, looking for anyone who may have converted these same .sfz files to .sf2’s… and my search took me to myriad forums, whose links then led to dead-ends. At last, I came across one link that hadn’t been taken down!

Ok! I was in business! I ran MuseScore and told it to find the folder in which I had downloaded the .sf2 version of SSO… only to come to the realization that MuseScore only reads ONE file at a time… and this package contained 57….

I read more in MuseScore’s online handbook about editing SoundFonts. And I found there a list of tools created to edit and combine SoundFont files — just what I needed!

Unfortunately, I’m not entirely brilliant when it comes to working with some of these tools, and the one and only free option for Mac (WHY???) had me jump through some hoops to donate first and then receive the download. I can understand, and I did… and I downloaded a file of gobbledygook… 😡

Yah, I could have asked hubby to help, but I didn’t want to bother him — this was my project, and I just wanted to find something that would pop up an editor on my screen and let me go to work, darnit! So I explored the other non-free options….

I found PolyPhontics to be promising — they’d let me download a free trial version — YES! But, after downloading and learning how to use the editor, I found the free trial version only lets you combine up to eight files… not 57…. To do that, I’d have to purchase the $60 actual program.

Not that I’m above doing so. But, I honestly couldn’t see myself needing to do this more than this one single time. And if I did come across a second instance of needing to edit SoundFonts, well, then I’d consider it… But until then….

So… I was left with some Windows versions… and we are not a PC family, lol.

I did more googling about, just to see what else I could possibly find before I pestered my friends and family who have Windows, and — while this was still PC only — I came across a program that was billed as functioning only as a sf2 combiner — EXACTLY what I was trying to do!! So I downloaded it….

Ok… on to pestering friends with PCs….

After one attempt pestering a friend that didn’t go so well… well, I went on to pester my little brother, hahaha!

Kudos to Billy Wallin for figuring this out for me!!!!! 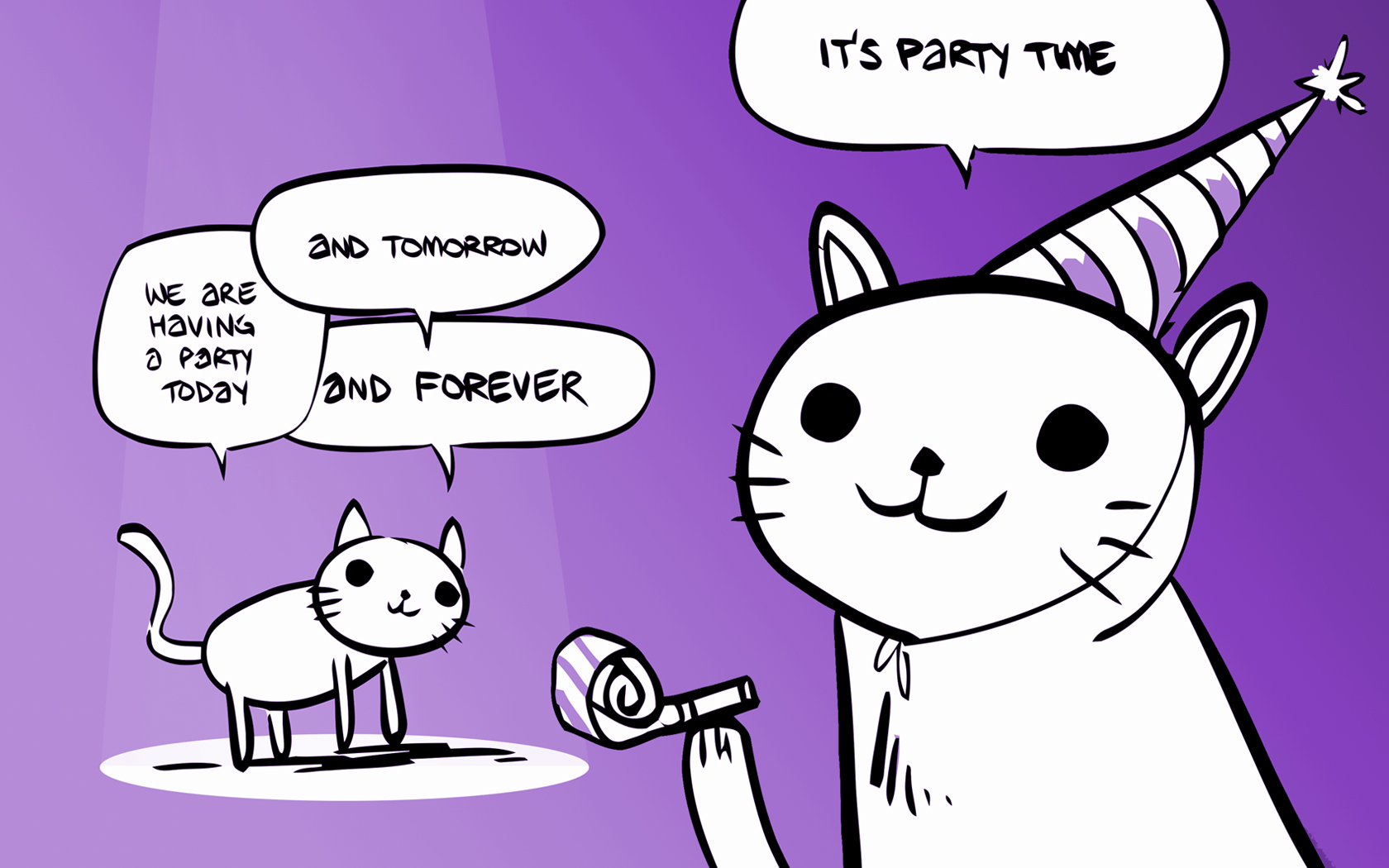 So, Billy downloaded the Windows-only Sf2Patcher program, and downloaded the 57 SoundFont files of the .sf2 version of the SSO library, and worked it!

We ran into a minor snag the first time he sent me the finished combined sf2 file; it was missing 6 of the original files. Billy reports that he was reasonably sure he didn’t leave those 6 out; but he has said “Program isn’t very good at adding a mass of files… gotta do it one by one.”

Apparently, the Sf2Patcher program isn’t exact, and to add in those 6 missing files, Billy had to start all over and just make sure that all 57 had been added. But the second time around it did its job! Billy sent me the final combined SSO .sf2 library as a single file, readable by MuseScore!

It took some monkeying around with the new SoundFont in MuseScore to get it to sound reasonable, which is to be expected. And, to be sure, there’s more experimenting to be done.

Now, there is another free Windows-only downloadable SoundFont editor that looked mighty promising: Polyphone. Simply based upon the presentation and care of their site, this looks like a great option, perhaps (and probably) better than the Sf2Patcher. Billy said he might be willing to play around with Polyphone later and give a report on its functionality.

If anyone else has experience with it, feel free to post your experiences here!

One more thing I learned in my adventures. I had considered during the course of all this that, if I couldn’t get MuseScore to playback using SSO, perhaps I could get GarageBand to do that very thing. What I have been doing recently in creating my nicer MIDI demo recordings of my works is importing my MuseScore files as standard MIDI into GarageBand, then using the soundbanks in GarageBand to spruce things up. So this option made sense. And, wouldn’t you know it, I stumbled across this article detailing exactly how to do this, using a free download of the Alchemy player. So I tried it myself. It worked all right, but at various times, various tracks would suddenly revert back to some different MIDI bank. I’m sure I could play around with it some more, and probably will, and figure this out. But, again, in the realm of writing, I just have to prioritize.

My thinking is that if I can get the MuseScore file itself to sound extraordinarily decent using the SSO SoundFont, I can export the entire thing as a .wav — with all tempo changes, etc., intact — into GarageBand, and just add the final touches of reverb, etc in GarageBand…. WAY easier, way less steps….

And, yes, I know, probably Logic can do all this without these extra steps and sound amazing. I’m sure I’ll eventually fold and purchase the sucker — many of my composition students already have. But at this point, I’m still a bit old-school, it’s all free (I’m spending my money on live recordings and production with PARMA!), and I’m only using my demo recordings to give an idea of what my works can sound like LIVE!