Score and one set of Parts included.

Completed in 2013, this work is “A Romantic Expression Based on King Solomon’s Song of Songs.” Flirting with musical and dramatic elements from Medieval Europe to the ancient Middle East and Ancient Greek Theatre, “Of Roses and Lilies” features the solo soprano in the role of The Woman. She expresses her love, devotion, and delight toward her Lover while the Daughters of Jerusalem — as with that of the collective commentary of a Greek chorus — listen and engage with The Woman in her tales touting the glories of her Beloved.

The work is in three major sections following the expressive and fluid introduction: the first in A Minor, introducing the characters and their vivid emotions; the second in A Major, during which The Woman shares a tale of her Lover calling her to escape with him into the night… “For the winter is past and the rain gone…” —when for a moment she hesitates, she wonders if she is too late, only to find that he is still there waiting for her, encouraging her with the sweet words of his continued adoration toward her; the third section returns to the original themes in A Minor, yet gains an expression of great power and fervency as The Woman’s love for her Beloved utterly transforms her.
Score and one set of Parts included as a single PDF file. 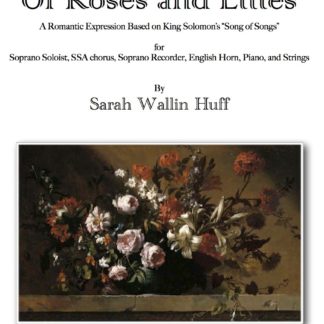