After twenty-five years of silence, “The Lady Tennant” Stradivarius took the stage again in the capable hands of Yang Liu, today at 6pm at the Kennedy Center. You can read the backstory for this special concert event in this article.

Liu’s performance opened with the much loved “Spring Sonata” — Beethoven’s Sonata No. 5, Op. 24, followed up with the Bach Chaconne and Prokofiev’s Second Violin Sonata. If you’re like me, and you couldn’t catch a last minute flight out to Washington, DC to see this concert live, take heart! The Kennedy Center not only streams live broadcasts of the nightly events on its Millenium Stage (where the Liu performance occurred tonight), but, if you happen to miss the live broadcast, the Center also keeps archives online for later viewing.

So don’t miss out! You can still see Yang Liu performing on the â€œthe most expensive musical instrument purchased at auction”. (Note: Don’t fret if the sound is too soft at the beginning of the performance. It does pick up a bit, and properly levels out by the start of the second movement of the Beethoven Sonata.)

You can find the archived performance here. 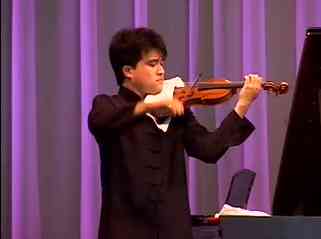